The European Disability Forum, Inclusion Europe and the European Association of Service providers for Persons with Disabilities are extremely concerned for the lives of 100,000s of persons with disabilities who are stuck, or are trying to flee Ukraine, due to the current invasion of the Russian Federation’s military forces. 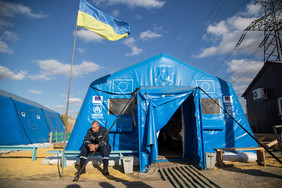 The majority of the 2.7 million people with disabilities in Ukraine are in an extremely threatened position, in large part because they are unable to access safety – even basic shelter. Despite this, persons with disabilities are not being prioritised in the political and humanitarian response to the war on Ukraine. The EU and other institutions need to create specific funding and action to tackle this issue. These were the main messages collected by EASPD from the Press Conference on Ukraine organised today together with the European Disability Forum and Inclusion Europe.

Valery Sushkevych, President of the National Assembly of People with Disabilities in Ukraine, stated: “there is a crisis within the humanitarian crisis”. He referred to a call from a woman with a disability, living on the 16th floor in a high-rise residential building, who told him “Valery, I am all alone, get me out of here, save my life”; demonstrating the perilous situation for many persons with disabilities who are unable to get to safety without support. He concluded with a call for “earmarked funding specifically for persons with disabilities in Ukraine from national, EU and international authorities”.

Yuliaa Klepets, from the All-Ukrainian NGO Coalition for Persons with Intellectual Disability, confirmed stating “I am in Kyiv in the capital together with my adult daughter who is autistic and has behavioral disorders. Currently we cannot possibly leave the city of Kyiv. I also have my mother who is 82 years old. She cannot move. We cannot go downstairs to the bomb shelter. Please believe me and we are not alone in this situation. There are many of us in this situation, all over the city of Kyiv, all over Ukraine.”

Raisa Kravchenko, also from the All-Ukrainian NGO Coalition for Persons with Intellectual Disability, added that “one of our NGO leaders has a son with autism and cannot leave him for more than one hour. Which means that she cannot queue for the pharmacy, for the supermarket, for the bank machine and therefore cannot get the drugs, the food, the money she needs. She needs help for even these basic amenities. We also know that those with severe disabilities, and those whose parents are older, they do not leave Ukraine. The trip is so difficult and so long.”

Yannis Vardakastanis, President of the International Disability Alliance and the European Disability Forum, stated that “since the beginning of the war, persons with disabilities face heightened threats, which is increasing the risk of abandonment, violence, injury and death. There is a lack of access to evacuation support, a lack of access to information and a lack of access to emergency shelter. At the same time, persons with disabilities who have managed to evacuate by themselves are not being supported sufficiently when they arrive in neighbouring countries. Much of the response comes from the disability movement itself, not from the national governments or humanitarian community. This should not be the case. We want to be part of the solution but not the solution itself. We call on the EU to direct specific funding for humanitarian support to persons with disabilities and their families.”

Speaking on the situation of those with disabilities who were attempting to flee Ukraine, Gunta Anca, General Secretary  of the European Disability Forum stated: “In order to help persons with disabilities evacuate safely, support services are in dire need of volunteers who can help  persons  with disabilities move from Lviv and the border of Poland, for instance, to where they can take the refuge that is being offered by countries further away."

Milan Šveřepa, Director of Inclusion Europe, said “there is urgent need to provide food, water, medicine and other necessary items to the families and to people in the residential care homes; there are 30,000 adults with disabilities in these institutions. Refugees with disabilities are some 10% of those fleeing the war. They need rehabilitation equipment and many other means of support. Disability organisations and other NGOs are doing tremendous work in Ukraine and in neighbouring countries. They need proper coordinated support from national and EU institutions and from humanitarian organisations.And first and foremost, Russia must stop its war on Ukrainian civilians.”

Concluding, Maya Doneva, Secretary General of the European Association of Service providers for Persons with Disabilities (EASPD) highlighted, “the testimonials we heard is the basis for identifying what we need. It’s very clear what we need. We urge everybody, people, organisations and especially public authorities and humanitarian institutions, to support the disability NGOs that are still working in Ukraine, to support the NGOs working in the border countries. The European Commission’s CARE initiative is a start, but let’s focus now on acting, providing the funding today, yesterday even!, to the NGOs on the ground”.

For those willing to help, we recommend visiting the following webpages:

The European Association of Service providers for Persons with Disabilities is a non-profit European umbrella organisation, established in 1996, and currently representing over 20,000 social and health services for persons with disabilities. EASPD advocates effective and high-quality disability-related services in the field of education, employment and individualised support, in line with the UN CRPD principles, which could bring benefits not only to persons with disabilities, but to society as a whole.